The Feystone Shards is an adventure for characters from levels 5-8, optimized for 4-6 player characters. This moderate length campaign should have 20+ hours of gaming, all focused around the Forgotten realms area of Red Larch. The Heroes are tasked to find five fragments of a shattered Orb, once worshipped by a faction of Elves. The search will take the party to a haunted Citadel, as they seek the scattered remnants of the Feystone. From a city of Stone Golems, to an alchemist's underground lair - the players will face obstacles and enemies that will challenge their very resolve. The Heroes will need to discover the secrets of the bauble's fey magic, finding the lost Elvin city where the Orb was once worshiped as a God. Join in the hunt for the Feystone Shards, and see if your characters are ready to transcend common Heroes...and become Legends. No treasures here just lying around to be taken. This tomb's riches fight back! A new tomb has recently opened for business in your area! The wealth of a wizard's lifetime can be yours! Defeat his traps! Slay his guardians! Zathis the Insightful took a century to collect these marvelous treasures. Now they can be yours in a matter of hours! This is the second of the "High Forest Factbook" adventures series. The caravans have stopped arriving from the North. Lady Morgwais has asked you to investigate and help reopen the trade routes. What begins as a quick job turns into a race to save a queen. This module is designed for 3-7 characters of third through fifth level. It includes a detailed description of the Elven village of Reitheillaethor including it's NPCs. It can be run either as a continuation of the adventure started in "Menace of Merric", as an extended stand alone adventure or the three individual tombs included in it can be run as short one-off adventures. 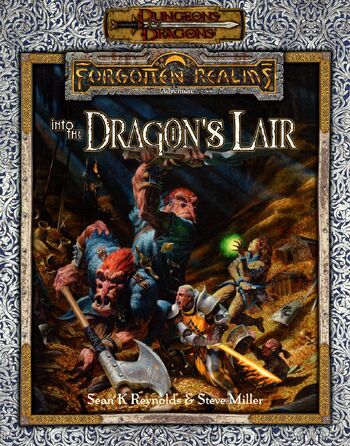 Into the Dragon's Lair takes place in the Forgotten Realms setting, and takes place after the novels The High Road and The Death of a Dragon by Troy Denning. The nation of Cormyr tries to rebuild after the death of King Azoun IV, and seeks the treasure hoard of a dragon to fund these efforts and keep the kingdom from falling into chaos. The player characters must find this treasure before all the other seekers.

Since time immemorial, you and your people have toiled in the shadow of the cyclopean ruins. Of mysterious origins and the source of many a superstition, they have always been considered a secret best left unknown by folk of your hamlet. But now something stirs beneath the crumbling blocks. Beastmen howl in the night and your fellow villagers are snatched from their beds. With no heroes to defend you, who will rise to stand against the encircling darkness? The secret of Chaos are yours to unearth but at what cost to sanity or soul? An introductory adventure for the Dungeon Crawl Classics Role Playing Game, Sailors on the Starless Sea pits a mob of 0-level adventurers against legacy of the Chaos Lords and their corrupted hordes. Delving beneath the crumbling ruins, the characters discover ancient crypts, a starless sea, and an ancient ziggurat, where death and treasure await in equal measure! A half-marilith, half-medusa druidess lich known as the Hate Blossom lairs in this dungeon, having been run out of mortal society and shunned by demonkind. She possesses the petrified-yet-still-living body of Melenkir, the first human arch-mage and the single creature to remember a ritual that may save the realm from an extraplanar threat. Only slaying Hate Blossom or convincing her to lift the curse will revive Melenkir.

This adventure is designed as a side quest that can be inserted into an ongoing adventure or campaign. It involves a series of three linking scenes (and an optional fourth research scene between the others) that can be placed in between the action of whatever other event the party is undertaking. Ideally the scenes of this side adventure should be spread out and inserted into the game over several sessions of play. Designed for a group of low level characters.

From the magazine: "If the book is to believed, there's a magical sword - completely unguarded! - ripe for the taking." This short adventure starts with the players finding a diary describing the final resting place of Hrothgar and his powerful intelligent sword. In a quest for the sword, the players investigate a small cavern system and find the sword in a gelatinous cube. Something awakens beneath the ruins of ancient Giustenal, the City by the Silt Sea. Many have tried to discover the secrets of this forsaken place, to plunder its legendary treasures. Few have returned from its shadowy embrace. Did they run afoul of savage raiders in the desert wastes? Did they lose their way in a sudden sandstorm only to sink hopelessly into the blowing, shifting silt? Perhaps they heard the psionic voice of the Caller in Darkness and succumbed to its mesmerizing summons? Or did they meet the true master of the ruins, a being as old as the Dragon and just as terrifying?... The burning world has reached a critical stage. For Athas, it could mean the start of a time of renewal, or it could herald the end of the world! It all begins in the ruins of Giustenal, in a place from another age, in the corpse of a shattered, long-dead city. Something stirs in the City by the Silt Sea. Something evil....