After hunting for the Pirates of Ebor along the coastline, you witness a strange event. A great colossus is seen as you travel along the coastline and you are informed that it is the “Artifact at Gegios”. As you put into port, you make inquiries and decide to investigate further, after all, an artifact is usually useful! Is your party strong enough to uncover the truth of this legend?

Your time on the mainland of Calentria has come to an end and with an appropriated ship you find yourself approaching a collection of island in the middle of the ocean. Some of the sailors that have ventured into this area before report there may be a language barrier. As you approach a large land mass a dark shape in the sky seems to take notice of you… Sekarvu is a typical beholder. It spent much of its youth exploring underground realms and killing everything it found. One day, it came upon a large cavern filled with violet fungi. At the edge of the cavern, it found a small band of adventurers who had all but succumbed to the toxins of the fungi's tendrils. They offered little resistance to Sekarvu as it approached and began to feed on their still-writhing bodies. With its first bite, the beholder's life changed forever. A generic tomb exploration. Usable for a quick one off or random exploration discovery.

The Denali Monarchy has been toppled and the citizens have formed a new government. The new head of the government, called The Hona, has requested additional help from the party. For a long time an island to the east called Rodo has been a source of goods for the land. The Hona wants to make sure that local regent, Lord Karlock, is going to continue to be a part of Denali or if he has other “thoughts” on the matter. Is your party ready for a diplomatic relations mission? "The Devil Box" is a D&D adventure suitable for four 2nd-level PCs, although it can be modified for parties of 1st or 4th-5th levels as noted int the "Scaling the Adventure" sidebar. Characters completing the adventure are likely to advance to 3rd level. Much of the action takes place in a small town during a festival; this town can easily be dropped into an existing campaign. Since "The Devil Box" expects the PCs to deal with kobolds as temporary allies, it throws in some ethical dilemmas for good-aligned characters. Paladins and good-aligned clerics my have difficulties with such an alliance, but kobolds are definitely the lesser of the two evils involved in this adventure. If the party spurns the assistance of potential kobold allies, you may wish to modify the adventure to make it a bit easier on the player characters, as encounters have been written with the assumption that the heroes have a little help. Uploader's note: A hilariously creepy adventure involving a circus (freeakshow), with in style illustrations! (Grid maps included, but not separate maps.)

A Pathfinder/3.5 Compatible Adventure for 4 level 7 PCs Deep within the blasted desert wastes a mysterious black tower has been sighted. The structure is not marked on any known map and has not been seen in this location by travellers in the region, yet there it stands. The adventurers set out to explore this ancient, isolated tower that appears ripe for the plundering. Within they face a gauntlet of insidious traps and supernatural horrors. The deeper the adventurers delve, the more secrets of the tower’s origins they uncover. The tower’s sinister creator does not rest easy in his arid grave – the adventurers must face him if they are to survive the Tower of Screaming Sands. Also included in “Tower of Screaming Sands”: Five deadly new traps: The Chamber of Ten Thousand Teeth, The God’s Grasp, Chamber of Flooding Sand, Hall of Arcing Blades and Descending Stone Block. A new monster – the scorpion swarm. Rules for whirlwinds, a new magical hazard GM tips for running overland travel.

A small side track Adventure for adventures in the country side

After beating back the forces of The Triad the party’s fame has spread. Jobs have come in droves but none seem to interest the group until a strange letter is delivered by a young courier. A historian named Nagel Littlestrom would like some bodyguards for a pending trip to a place called the Delo Ruins to the east. Certainly a few items can be located that would be of interest to the party… 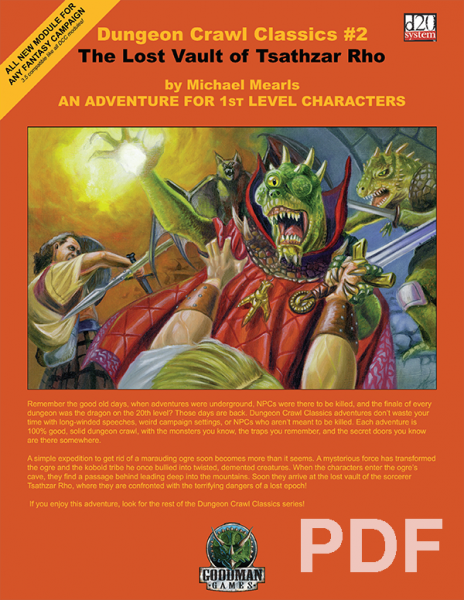 In The Lost Vault of Tsathzar Rho, a defenseless village asks the characters to slay an out-of-control ogre. Sounds easy enough. But the ogre, who used to be nothing more than a nuisance, has become crazed and psychotic. When the characters arrive at its cave, they find a subterranean portal has connected the cave to a much larger underground complex. Something in that complex has transformed the ogre and many other local creatures into fiendish marauders. In fact, it’s the lost vault of Tsathzar Rho, an ancient wizard and prophet of the Outer Gods, who are gathering their foul minions for battle. As the PCs opt to leave the “friendly” confines of the Duchy of Starryshade due to some unfortunate misunderstanding, they head north. The Noteflame Coast is filled with desolate reaches, humanoids of all types, and the home base of the Corsair Council. The major community in this county is Kale Bay but getting there won’t be easy. This offering is more of a sandbox style with several optional adventures.

This adventure is scaled for level 1 characters. The ruins of a flying castle teeming with goblins is heading to the peaceful village of Barrowmist. It is up to the heroes to get up there and stop it before the castle lands in the village and chaos ensues. The group will enter into the ancient struggle between elves and orcs. Not only can they claim the ruins as their home, but the heroes will be asked to go on a quest to repair the castle and use it to find the Misty Isle, a legendary elven realm stolen by Gruumsh, god of the orcs. This adventure is the beginning of the Litany of Arrows adventure path. It can be run on its own or as a linked part to the larger story.