The hamlet of Thistle has a problem. The river they depend on for trade and food was recently poisoned with a tide of filth, and a goblin named Belig has claimed responsibility. If the people of Thistle don’t pay a ransom, Belig has promised them much worse will come with the next poison tide. A Forgotten Realms adventure for 1st-level characters. The Last Point is a prison and outpost of the Corrive Empire, a realm ruled by a cruel green dragon named Lady Corrive. The Corrivians are well known for their hatred of magic users, and their extensive slave trade industry. A forest realm with coasts on three sides and mountains running through the center, Corrive is rich with a variety of resources. However, the rocky northern coast is out of the way of their navy and relies heavily on hired ships to help transport various goods including prisoners and slaves to isolated outposts, training centers, and slave colonies. The northwest coast of Corrive is rocky and many parts of it are elevated, making it isolated from much of the mainland. The Last Point is a recycling center where captives meant for death row who are either deemed “not important enough” to execute publicly or “too disgraceful” to execute publicly are sent to be tortured and then killed. The place seems to operate on sort of a “well, we have too many so some have to go now” policy. The Last Point has no official deadlines for killing. The Free City: a shining gem in the crown of cultured civilization. Beneath the surface of this bustling metropolis is a rot, festering in the darkness, manipulating the lives of those unaware of its presence. Now a small adventuring band from out of town may be in over their heads. Their actions in Diamond Lake have attracted the wrath of one of the city’s hidden masters. A gang of infiltrators and an enigmatic mastermind plot their destruction, and only tracing the rot to the root can stop the onslaught. An Age of Worms Adventure Path adventure for 7th-level characters.

Following the threads of a hidden conspiracy in this adventure, the PCs find themselves up against insane cultists, wild chaos magic, and horrors from the primordial days of the world. The quest culminates in their attempt to stave off the Night of Dissolution: a dark time long foretold when the slumbering Galchutt will awaken in their hidden lairs deep below the city and bring catastrophe and woe to the world. The Night of Dissolution is an adventure for 4th-level player characters that most likely will take them to 9th level. The events in this book involve investigation, intrigue, action, and dungeon exploration. This adventure was written as a companion to Ptolus: Monte Cook’s City by the Spire, a d20 campaign sourcebook describing the fantasy city of Ptolus. It is designed to pick up right where the adventures in Chapter 33 of that book left off, although the story arc of The Night of Dissolution deals with a different focus. This book is a collection of six linked scenarios, each of which could be used separately. The crown of the kobold king will be anointed in blood. Five children from the town of Falcon’s Hollow have gone missing, dragged off into ruins underneath a cursed dwarven monastery. Soon they will be sacrificed to the crown, all to the glory of the twisted King of the Kobolds. If they are to be saved from this gruesome fate, brave heroes must follow their trail to the monastery and plumb the depths of its trap-laden and monster-infested halls. 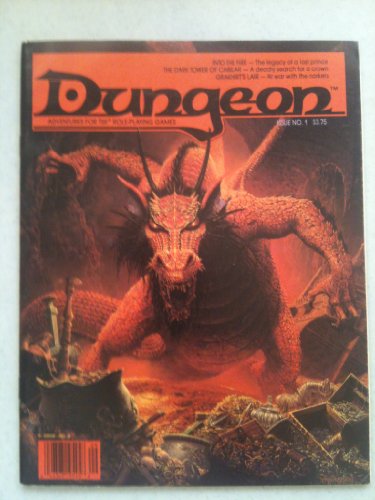 The prince's godmother commissions you to retrieve the prince's jade crown, held in the tower of the vampire! The vampire's tower has three levels, and the three-level dungeon below 45 rooms. The party must be wary! Lethal traps abound. Marching order is important. A straight-forward dungeon crawl with many Gygaxian rooms and encounters. No roleplaying to speak of. Two centuries past, the dwarven smith Durgeddin the Black carved a secret stronghold from the caverns riddling a hill known as the Stone Tooth. Laboring ceaselessly in their halls under the mountain, Durgeddin’s clan forged enchanted weapons for use in their vendetta against the orcs that had driven them out of their old homes. Durgeddin and his followers are long dead, but the dwarf-hold is not empty. Deadly peril waits in the caverns beneath the Stone Tooth, as well as Durgeddin’s hidden armory of matchless weaponry. The Forge of Fury is a dungeon crawl, or site-based adventure, describing the ruined stronghold of Khundrukar. The characters come to the Stone Tooth in search of a hidden cache of Durgeddin’s superior blades. They find the old stronghold inhabited by a number of dangerous monsters. 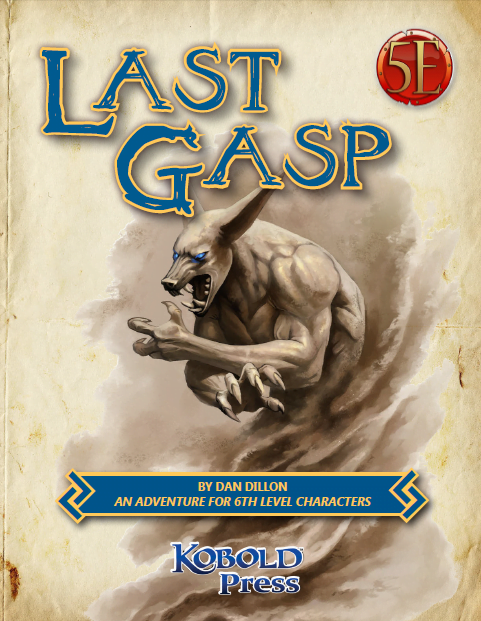 Last Gasp is an adventure set in a desert setting, exploring the cursed tomb of an ancient king of great magical power, a magical river, and includes both deadly combats and mysteries to confound tomb-robbers. It is designed for five or six 6th-level characters using the 5th Edition rules. Seek out the riches of a king, and may fortune favor you!

The Heroes are brought to a great city and rewarded for their past heroics with status and citizenship, but they soon find they are being hunted by a hired assassin. They must find and defeat the assassin, the person that hired him, and find a cure for the lethal poison coursing through their veins from the attacks.