Part of AEG's Adventure Keep line of short, cheap modules in half-sized format (4-1/4"x11"), it is intended to be run as a single session. The PCs get send to Osell, a small village in a swamp, to find out why it was destroyed by lizardfolk. The whole adventure takes place in the ruined village, where the lizardfolk have set up camp, There are different factions at play and a greater danger in the poisoned swamp. Bitter Waters was updated to D&D 3.5 for the AEG adventure compilation 'Adventure II' 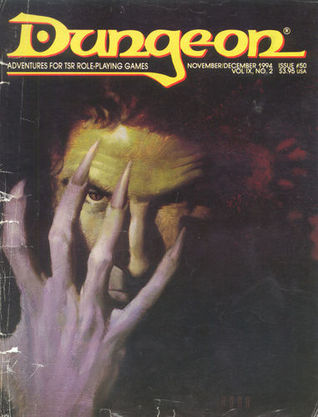 A Four to Six Hour Adventure for 11th-16th Level Characters in Dungeons and Dragons 5E The Adult Green Dragon Valturnax has attacked the nearby village of Hartsvale, threatening to destroy them completely if they do not submit to his rule by nightfall. To save the town, adventurers must ascend the mountain by climbing through the caves housing the dragon’s minions and face him in his lair – and they need to do so before the sun sets. This adventure is meant to be quite challenging. Enemies know the adventurers are coming and have had time to prepare, and they do so intelligently. This adventure draws some inspiration from Tucker's kobolds. As an added bonus, this adventure is available completely for free.

"The Aboleth's Grotto" is a nihileth lair suitable for four 10th-level characters. The adventure can be completed in one session. The small town of Springwell harbors a secret that almost nobody knows about, and those who do conveniently ignore: it sights right over an unoccupied settlement of the deep caverns of the underworld. When the iron mines that made Dustpawn so prosperous played out not long after the Goblinblood Wars of Isger ended, the city shifted its focus from mining to goat herding with quite a bit of success. Things have, as a result, been quiet and calm in Dustpawn for the past several years, but that quiet is shattered the night a strange falling star roars across the sky above town to crash somewhere in the hills several miles to the south. When several locals eager to find the fallen star and strip it of its ore go missing, it becomes apparent that whatever has fallen from the sky is much more than a mere meteorite. There are those in town who claim the falling star was in fact a ship, and now a strange malady is creeping through the townsfolk. Every priest in the city dreamed last night of a forgotten temple carved into the side of a nearby mountain. In the dream, a storm raged deep within the temple, and the dreamers knew instinctively that evil forces sought to unleash that storm upon the surrounding lands. This module follows X4, Master of the Desert Nomads. Sent on a desperate mission into an unknown land, you must seek out the one called "the Master" and his Temple of Death. There is little time to waste, as you must act before the Master's armies destroy your homelands. But to complete your task, you must battle fearsome guardians, travel through a hostile kingdom, and discover the secret of the master. Can you survive his defenses and win? TSR #9069, from 1983

Your adventurers are in luck! They are stumbling into the town of Larksville just a day before the Annual Cockatrice Race! This event and the revelries surrounding make up a week of pure entertainment for anyone passing through the area. The town is of medium size with a population close to one thousand, but during their Fall Festival that number is nearly tripled as people from all around flood in. The air is constantly filled with music and the smell of delicious foods. There is a bard in every tavern and a drunk passed out in every street. Most buildings are hanging red, gold, and orange decorations (the official colors of the festival) and anyone wearing those colors receive discounts on goods!

Roots of Evil, the conclusion to the adventure begun in From the Shadows, delves into the horrific origins of Strahd von Zarovich, master vampire. This 96-page adventure module features Strahd in his final showdown with Azalin the lich, the two most powerful lords of evil in RAVENLOFT® realm. Player characters return to the popular Castle Ravenloft and discover never before known facts about the vampire's roots and origins. The outcome impacts the RAVENLOFT® realm for years to come! [text from TSR Master Catalog, 1993] While camping in the wilderness, the characters find a tracker surrounded by wolves. Once the heroes dispatch the beasts, the tracker reveals that she is seeking aid in the fight against the darkness enfolding her community, Silver Lake. Should the characters help, they find the village terrorized by lycanthropes that hail from a tiny island rising from the mist-shrouded lake.The island is a fey crossing, and heroes who set foot on it find themselves in the Feywild, where a war is brewing; the lycanthrope clans are at each other’s throats, and many are turning their feral eyes outward to the rich lands beyond their secluded valley. To avert an unimaginably savage war, the heroes must rescue a werewolf lord from his captors and expose the conspiracy that threatens to drench the Feywild in blood... A hundred miles off the Chelish coast lies the remote island of Deepmar, where the House of Thrune sends prisoners to work in crystal mines, wresting valuable spell components from the depths of the earth. A month ago, all contact with the penal colony ceased, and now someone must discover what mysterious fate has befallen the prisoners and guards of this isolated mining operation. Mini-Dungeons #1: CAVES! 3 extraordinary and original adventures in one affordable bundle! This is a collection of three mini-dungeons. They can be run as stand alone one-shot delves, or you can use the tie-in suggestions to link them together as a mini-campaign climaxing in a glorious dragon battle! 1. Lizard Folk Tunnels - APL2 to APL5 2. The Cavern of One-Eye - APL4 to APL7 3. The Lair of Frostingbite - APL5 to APL8