The Iron Gods Adventure Path begins with "Fires of Creation," an exciting new adventure set in Numeria, land of barbarians and super-science! In the town of Torch, the settlement's unignorable tower of violet flame has gone out. The only clue to its disappearance is a newly discovered cave dug nearby. Are the heroes bold enough to unearth the otherworldly secrets that sleep beneath the city and reignite the fires of Torch? Or will their first foray into Numeria's ancient mysteries be their last? The coastal city of Magnimar is no stranger to crime, yet recently, a series of murders has sent a chill through the early morning streets. Someone—or something—is stalking and killing worshipers of Sarenrae, the goddess of the sun. The city guard is prepared to ambush the murderer, but they need help—help of the kind that adventurers are so good at providing. What is the sinister truth behind these violent acts? 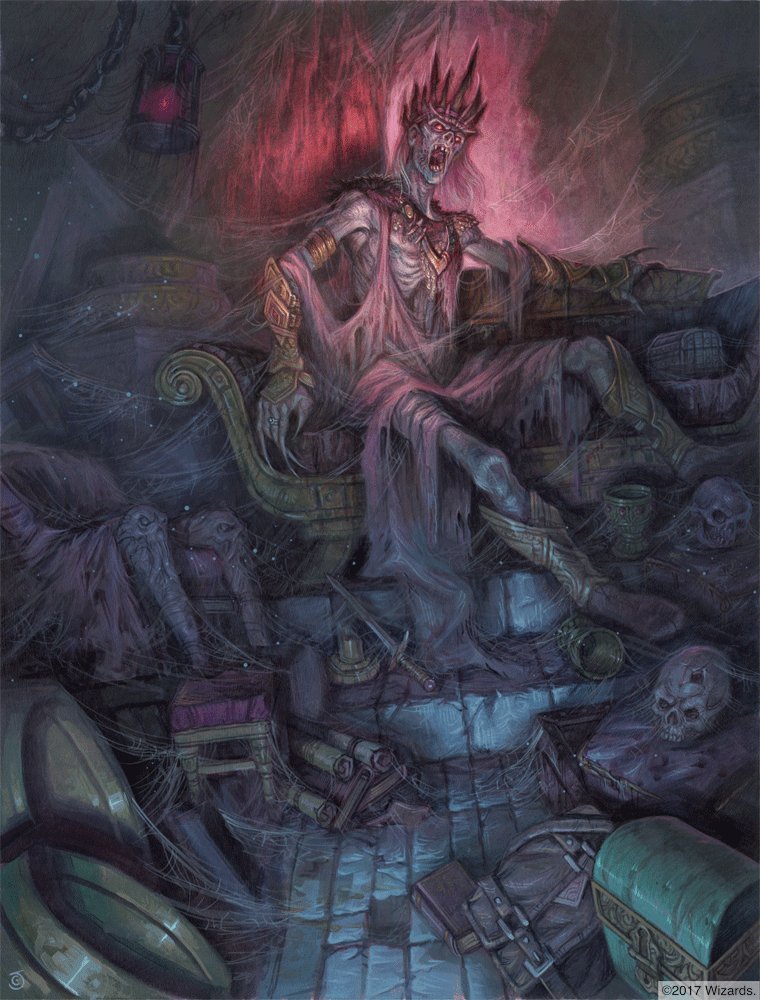 In the far reaches of the world, under a lost and lonely hill, lies the sinister Tomb of Horrors. This labyrinthine crypt is filled with terrible traps, strange and ferocious monsters, rich and magical treasures, and somewhere within rests the demilich. Remake of the original AD&D adventure. The city of Sharn is one of the wonders of Khorvaire. Its towers seem to touch the sky, rising up more than a mile from the shores of the Dagger River. But it takes more than stone and steel to support the spires of Sharn: the area is suffused with mystical energy drawn from the plane of Syrania, which empowers all forms of flight. Yet with such wondrous inventions come wondrous tragedies, for when the magic of a flying tower fails, it has to land somewhere... Fallen Angel is a D&D adventure suitable for four characters of 3rd-level. This adventure is set in the city of Sharn in the Eberron campaign setting, but the sidebars provide suggestions for running the adventure in a different setting or at higher or lower levels of play. 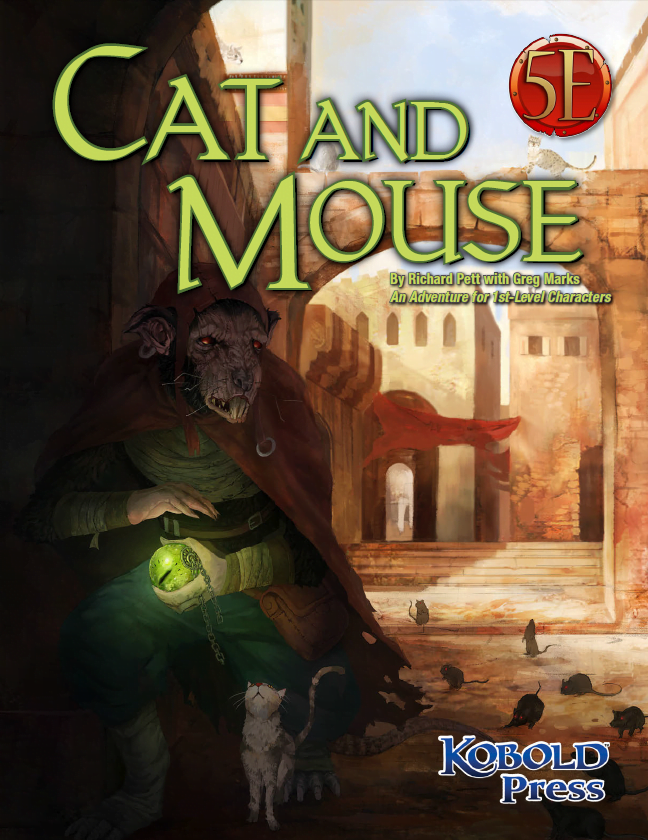 Who Do You Trust? In the cool streets and blazing bazaars, the word is out: a great treasure has gone missing in the Everlasting City of the Cat, and some very ambitious people have set their sights on it. Many paws and claws are out, and everyone is sniffing around for something rich and strange. It’s an odd time for a catfolk thief and a gnoll merchant to make very tempting offers to strangers in town. Or, perhaps it’s not odd at all. Get caught up in the hunt with Cat and Mouse by Richard Pett and Greg Marks! This 5th Edition adventure for 1st-level characters is a perfect introduction to the Southlands campaign setting, and it fits neatly into any desert city where cats are sacred and rats are cautious and sly. 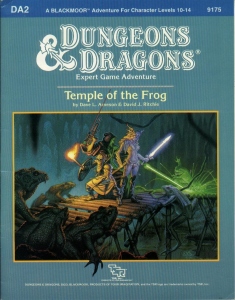 A little information is a very frightening thing. Hundreds of years ago, the elves and the goblinkin fought for control of known space in the Unhuman War. Though the elves won that first campaign, they know the goblinkin are clamoring for a rematch. Recently the elves commissioned a few good adventurers to infiltrate the base of a new race of advanced orcs known as the scro. They were hoping to gain information on their enemies' numbers and plans. The news they found was far worse. The scro have discovered a weapon of awesome destruction, one that can lay waste to entire worlds. But the key to unlock its power lies lost and forgotten. Even now the scro are searching for it. When they find it, they will wreak destruction and revenge on the inhabited planets. The elves are looking for an adventuring team who can win this desperate race, and find the key first. Your PCs may be the only thing that stands between known space and doom. Heart of the Enemy is a 96-page adventure set in the Second Unhuman War. The second of a two-part series, it can either be linked with the previous Goblin's Return or it can be played as a stand-alone adventure.

For decades, Theatre Infernalis offered shocking and frightful entertainment to customers who entered its gaping demonic facade and saw a frightful portrait of the eternal torments that await all sinners. Now rumours tell of the aging and supposedly-cursed proprietor's deteriorating health and the theatre's impending sale, and the Artist's Quarter has been abuzz with those seeking one final fright with a walk through the crucible-licked walls of the infernal house of the macabre before its final curtain call. But are the theatre's smoke-and-mirrors and cheap scares hiding a truly wicked secret? What is the nature of the curse and illness that afflict the owner? And did foul and profane rites once take place between its walls that outside forces now seek to exploit? What happens when the spookshow's fun and games transform into a terrifying reality, threatening to spill forth an infernal malevolence onto the streets of the Blight? 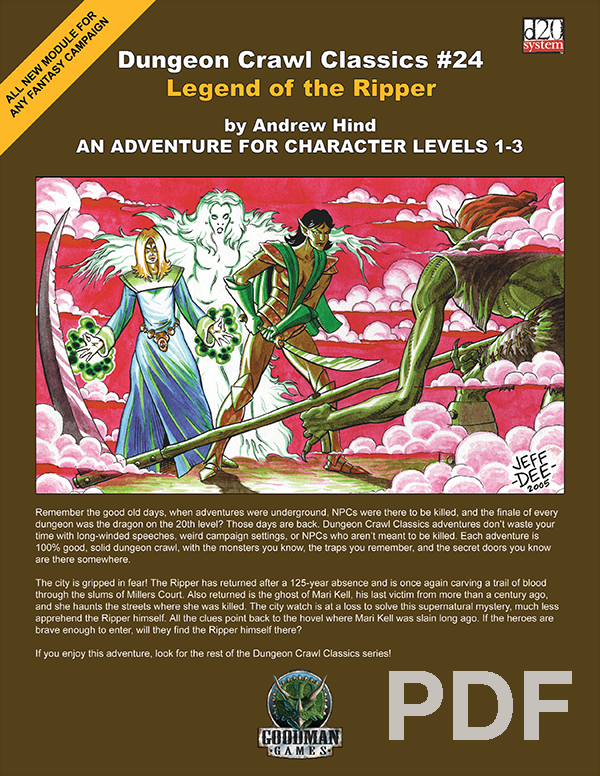 The city is gripped in fear! The Ripper has returned after a 125-year absence and is once again carving a trail of blood through the slums of Millers Court. Also returned is the ghost of Mari Kell, his last victim from more than a century ago, and she haunts the streets where she was killed. The city watch is at a loss to solve this supernatural mystery, much less apprehend the Ripper himself. All the clues point back to the hovel where Mari Kell was slain long ago. If the heroes are brave enough to enter, will they find the Ripper himself there?

Rumours tell of a secluded cave where a powerful cleansing artifact resides, guarded by a mythical creature that no one has seen and lived to tell the tale. Heat boils forth from this cave, and tortured shrieks echo on the wind. Do you have what it takes to brave the Lair of the Lava Queen?

Your adventurers are in luck! They are stumbling into the town of Larksville just a day before the Annual Cockatrice Race! This event and the revelries surrounding make up a week of pure entertainment for anyone passing through the area. The town is of medium size with a population close to one thousand, but during their Fall Festival that number is nearly tripled as people from all around flood in. The air is constantly filled with music and the smell of delicious foods. There is a bard in every tavern and a drunk passed out in every street. Most buildings are hanging red, gold, and orange decorations (the official colors of the festival) and anyone wearing those colors receive discounts on goods!