Step into the nightmarish bog where there are only two options: fight for your freedom... or be doomed to wander endlessly in through these dreadful wastes until your death. Do you have what it takes to defeat the vengeful hag and break free from this prison? (One of the one-shot adventures in Nerzugal's Dungeon Master Toolkit ) The Chapel on the Cliffs is a 5th edition horror adventure optimized for a group of 4-5 characters of 3rd level. In this module, the characters will need to explore the ruined village of Kennmouth and its surroundings, find out why a small army of skeletons rises from their graves every night to drive out intruders, and search for a way to lift this unholy curse.

Off in the wilderness are the ruins of a temple that once belonged to the God of Balance, Tyr. It has long been abandoned by the traditional followers, but it is certainly not empty. A few clever individuals have found a way to harness the magics that still reside deep within this holy place and are attempting to use it to give life to an Iron Golem. The party must stop them at all costs or have a powerful monstrosity released into the hands of some terrible individuals. 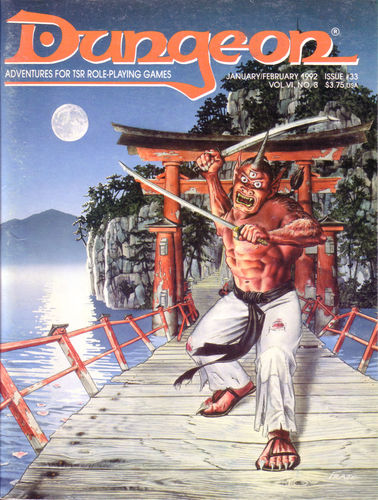 The orcs remember Tarran Kratys. Today he wishes they had not.

This uniquely styled adventure involves players starting out with little information about the characters they will play. No characters are prepared in advance. This is a nonstandard method of play. Player characters only know their names, ability scores, race, and background. This adventure was created to give the feeling we got as kids just starting out with D&D. It will be great for new players and seasoned vets alike. Who is in charge? Who is torturing the players? Let the chaos begin… A blood curdling SCREAM shatters our adventurers rest as they set up camp for the evening. Without warning the forest comes alive and a heroic struggle begins, as our adventurers battle to avoid becoming the forest's latest victims. Take your players deep into a cursed glade on a dark and stormy night to confront an evil Druidess, and a horrifically corrupt tree... Atop a distant mountain peak, a monstrous entity plots dark deeds. The final chapter of the Seeds of Sehan campaign arc.

"Deeptown lies in the shadow of mountains, a town where anything is for sale if you can only meet the price. But in the wild surrounding valleys of the Deeps, it's the bandits who make the darkest deals - and their ambition comes at a cost far greater than the contents of any wayward caravan. You and your team have just been handed a new job: disrupt a meeting between a bandit lord and his mysterious new allies. At a remote mountain villa, you will strike hard and fast and leave terror in your wake. They give you the tools. You provide the talent. Survive, and you'll be well rewarded. Fail, and you'll pay the price. You've got three days to raise some hell." This was one of the first third party adventures under the OGL for 3rd edition published by Atlas Games under the Penumbra line. The attack on the mansion is not a dungeon crawl, but feels like a commando raid aided by some unique magic items.

The PCs match wits with a brilliant assassin driven insane by the accidental death of her daughter years ago. To solve this dark murder mystery, the PCs must use their perception and intellect along with their arsenal of spells and abilities. A EBERRON adventure for 5th-level characters. Raiders of the Lost Oasis is an adventure designed for use with the 5th edition. It is intended for four to six 4th level characters and should be completed in a single session. The characters begin the adventure as captives and lack all of their equipment, both magical and mundane. A variety of character classes is suggested to tackle the challenge of escaping the clutches of the raiders and eventually the oasis. It should be noted that spellcasters are at a serious disadvantage as they will be bereft of most, if not all, of their spells. The adventure is set in an isolated oasis surrounded by a glass sea in a barren expanse of a trackless desert. The wedding was meant to unite poweful families from Everlund and Silverymoon. "Til death do us part" comes sooner for some couples than others when undead hordes and a feral demilich are uninvited guests. The Dead Wedding is a short, 3 to 5 hour adventure for characters level 14 to 16. The adventure contains maps for Moonshadow Keep and the crypt of the demilichess Regetta Arch Therm, deadly traps, and RP hooks that enable players to use high-level non-combat abilities.

A beached whale is claimed by two Viking houses, and is necessary to the survival of both. Player characters are caught in the middle. Roleplaying, politics, negotiation. Set in generic Viking fantasy setting. This is a short, "side treks" scenario.