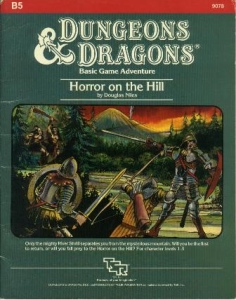 The end of the road. A lonely fort stands on the banks of a mighty river. It is here the hardy bands of adventurers gather to plan their conquests of The Hill, the hulking mass that looms over this tiny settlement. The Hill is filled with monsters, they say, and an evil witch makes her home there. Still, no visitor to The Hill has ever returned to prove the rumors are true or false. The thrill of discovery is too great to pass up, and only the river stands in the way. The adventurer's boat is waiting! This module is designed for use with the D&D Basic Rules. A trip through the wilderness begins a unique challenge for the novice player and Dungeon Master. Included in the module are 11 maps, 3 new monsters, and a complete set of prerolled characters. 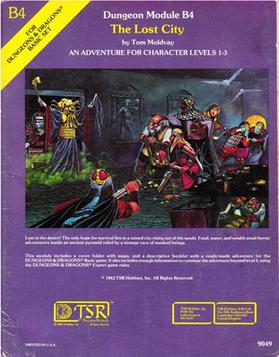 Who could know what is hidden within the secluded mansion of the crazed mage? Well, now, when nobody has seen him here for more than a year, it’s the best time to find out! A 4-hour adventure for two 1st–2nd level characters. Small Party Adventure: Though the party size of 3–5 characters is considered optimal in D&D, there are times when you can only gather one or two players at most. This adventure is designed exactly for such occasions. Temple of the Gleaming Sands is a short adventure for four 5th-level characters that features monsters, spells, and items from the newly released Sandstorm book. You can use this scenario to introduce the new material on deserts and arid wastelands into your campaign, or you can just use it as a site-based adventure in a desert area. The scenario is set in a remote area of the desert that very few humanoid travelers visit. The temple from which the adventure takes its name has lain forgotten for centuries and is now inhabited only by monsters who use it as a base. The area around the temple should be inhospitable enough to discourage humanoid settlement. 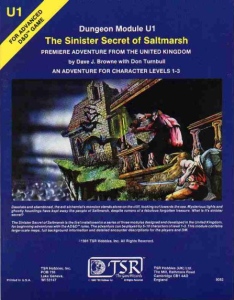 All the children of the Blight know the nursery rhymes about Bloody Jack Carver, cautionary tales for naughty or overly inquisitive children to mind their manners and obey their parents. However, their parents know the true horror of those times 30 years ago when the lunatic serial killer known as Bloody Jack Carver stalked the fog-shrouded streets of the Blight and abducted children. The killing spree finally ended, but the perpetrator was never caught. When the PCs are deputized to assist in a homicide investigation, they find terrifying clues that point to the three-decade-old Bloody Jack killings and signs to indicate that they were just the beginning. Now the PCs are in a race against time across the breadth of the decrepit and deteriorating city that is the Blight as they attempt to stop a new killing spree before it can start. The PCs’ investigation takes them from the halls of the Capitol and the seedy streets and alleys of Toiltown to the garish carnival piers of Festival and the pollutant-crusted banks of the Great Lyme River. Only they stand between the children of this decayed city and new nursery rhymes being written in their blood. Bloody Jack is a stand-alone adventure set in the Blight for 4–5 5th-level characters.