Watch out! This is the AdventureLookup development preview. All data you insert here is regularly wiped. Check out https://adventurelookup.com for the real website.
Adventures Login or Register
Add a new adventure
Random Adventure
A community for lazy dungeon masters
399 adventures found A generic tomb exploration. Usable for a quick one off or random exploration discovery. 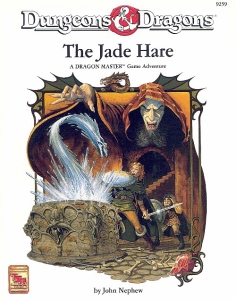 After turning himself into a manticore, the self-style wizard-artiste, Mortzengersturm, moved to the crystalline peak of Mount Geegaw to practice his transformation magic without interference. You've been hired to snatch his most prized artifact, the Whim-Wham Stone--or at least some of its eldritch light. A menagerie of magic hybrids, a self-absorbed vampire, more than a few hippogriffs, and of course, the mad manticore himself await! It's like a Rankin-Bass stop motion special--except it could end in a total party kill. Szass Tam, the lich lord of Thay, and his Red Wizards threaten to dominate all of the Sword Coast. The Bloodgate, an elemental node of power, must be destroyed in order to stop him. Remake of the original 4th Edition adventure.

This brief adventure is in the back of the Holmes edition of Basic D&D, published in 1974, 1977 and 1978. 100 years ago, the wizard Zenopus built a tower on on the low hills overlooking Portown ... this is a very quick introductory scenario introducing the essence of "old school" D&D. The Giants are on the March! The Rise of the Runelords Adventure Path continues! Driven to battle by a maniacal warlord, the once-peaceful stone giants of the Storval Plateau threaten to destroy the sleepy town of Sandpoint. Will fast action and quick wits be enough to save the defenseless community? Yet, even if the giants' initial raid can be repelled, only by striking at the heart of their titanic war machine—the black-towered fortress of Jorgenfist—can the menace be quelled. But who knows what mysterious bloodlust spurs the usually peaceful giants to war, or what mysteries lie beneath their ancient fortress?

This is the laboratory of High Alchemist Sureves Epans. He led a group of alchemists in research for many years, but recently there was a bit of a mishap. He discovered his wife was cheating on him with one of his employees and while in a drunken stupor trying to create a discreet potion to deal with the two of them, he let loose an infectious plague on the lab which turned all but a lucky few in the facility into shambling husks of their former selves., fused with their own creations as their minds turned to know but one thought - rage. This dungeon has rules to modify all encounters for a group of players levels 4 through 6 and is intended for a party of four. If you have more players, feel free to adjust the difficulty up one level for each additional player or simply tune the monsters to your needs. This dungeon contains many original enemies, a unique puzzle, and an environment that is meant to bring a sense of terror and anxiety on your players. I consider this to be the Horror-themed adventure of the module so feel free to add some creepy music and extra details along the way to bring the area to life (or death).

Long ago, a small but mighty humanoid kingdom existed in what is now the local wilderness. Bugbear and ogre warriors fought brutal wars of expansion, earning great fame and amassing considerable fortunes from their predations. Those who died in battle were buried in large tomb complexes dug into hillsides and honored as patrons of the living. Among these tombs was the large tor known as Hightower. Though it was neither the largest nor the most famous of the kingdom's tombs, Hightower did represent a typical example of this kind of structure. As happens to all such nations, the cruel humanoid kingdom eventually fell to a more powerful foe that razed all its cities and outlying fortifications. Of the tombs, only Hightower escaped destruction -- largely because it was an unimportant monument in a remote location. A few tribes of humanoids that survived the devastation tried to use it as a fortress, but the humans with whom they clashed defeated them soundly and sealed the entrance with a huge, round stone to ensure that the tor could no longer be used as a base. Since then, Hightower has served as a landmark for travellers in the know, but it has otherwise been largely forgotten. But the electrical storms that have plagued the area in recent days have been quite severe, and a few weeks ago, a stray lightning bolt broke open the stone seal. Tonight, yet another terrible storm is sweeping through the wilderness, driving all creatures to take shelter where they can find it. Hightower looms on the horizon, and its door is no longer blocked. Will the PCs dare to enter its silent halls? For years, the knights of Mendev have held back the evil locked inside the Worldwound, a vast, demon-tainted landscape. Every few years, they anoint a new protector, a sacred guardian charged with pitting his will against the teeming hordes bent on devouring the very souls of the living. This year, something has gone horribly wrong, and now a bloodthirsty demonic army has overrun the ancient fortress, and threatens to pour into the surrounding countryside. A generic tomb usable for one off adventures or unplanned exploration discovery.

Two hundred years ago, the great dwarf smith Durgeddin the Black built Khundrukar, a hidden stronghold for his war of vengeance against all orckind. For years Durgeddin labored, until the orcs discovered Khundrukar and stormed the citadel, slaying all within. Legends say that Durgeddin's masterful blades and glittering treasures were never found. The strange city of Carrion Hill has long loomed over the surrounding swamps in eastern Ustalav, yet its rulers have shifted many times through the centuries. Often enough that only a few sinister scholars and curious minds know the true nature of the hill’s original inhabitants—vile and depraved cultists of the Old Gods. Yet this morning, a dreadful recrudescence rises from the depths of buried nightmare in the vaults below Carrion Hill. A monster stalks the twisted alleys of the city, spreading panic before it and leaving destruction in its wake. Can the Carrion Hill Horror be stopped?

Far north of the Denali homeland is the Archipelago of Tyr and home to dangerous seafarers. Tyr is well-known as the land of the Minotaur that does allow some foreigners to visit albeit with less than perfect hospitality. Originally used as a one-shot with the Denali campaign characters, King Pellet sent the party north to investigate a trade deal and look into reports of some type of incendiary weapon…

Trouble Cubed is a is a psudeo-adventure for 3rd edition with three interesting gelatinous cube encounters. These three encounters are structured in a way that they can be used together as one adventure, or each individually dropped into any adventure from EL5 to 7. The encounters vary the cube's encounter situation significantly, and the tactics needed to deal with them, such as by trapping a character with a portcullis between a cube and a pit trap, placing a cube half down a pit trap, and having the cube accidentally ingest a beneficial potion (such as spider climb). The quiet village of Greenfork is in a state of uproar, scarred twisted looking goblins raided the village during the night and kidnapped the miller’s daughter. The Mayor has put out a call for adventurers to bring the girl back safely and end the goblins threat once and for all. This adventure starts just outside the village of Greenfork and thrusts players straight into the action. This book contains a full length tabletop roleplaying fantasy adventure: Advancing players from one to three. Sixteen monsters and characters. New Games Masters advice and guides. A fantastic first adventure for new players, but more importantly this adventure was designed with first time Games Masters in mind, giving you as many tools as possible to help run the game. 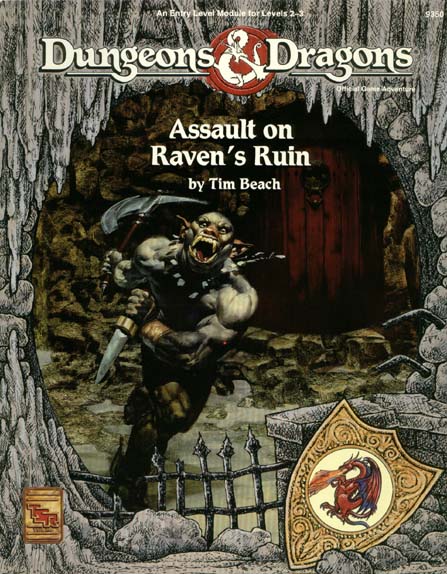 In the canyon of Thunder Rift, in the village of Kleine, goblins have always been a nuisance, but the natives have dealt with them and continued an otherwise peaceful existence. Now, a valuable magical item, called the scepter of truth, has disappeared! The ingenuity of the crime bears the mark of the goblins' leader, the Master Thief Raven. The scepter must be recovered, but there is no one in Kleine with the strength and courage to penetrate Raven's trap-laden hide-out, deep in goblin territory. A party of stout adventurers might survive the mission, but they will have to be quick, smart, and especially careful.