Watch out! This is the AdventureLookup development preview. All data you insert here is regularly wiped. Check out https://adventurelookup.com for the real website.
Adventures Login or Register
Add a new adventure
Random Adventure
A community for lazy dungeon masters
35 adventures found

The Underdark holds many secrets. A series of earthquakes and eruptions have rocked a normally placid land. Strange creatures sighted in the dark of night raise fears across the already disturbed countryside. As tales of a lost race that once warred with the drow begin to surface, only the boldest adventurers dare to descend into the shadowy darkness. From the magazine: "The monster you're sent out after is so dangerous that even mind flayers fear it. And the illithids want your help!" Earthquakes hit the area around Needlespire mountain, affecting both dwarven and deep gnome villages, and the local mining industry. Deep gnome expeditions discover an illithid outpost! This adventure includes roleplaying encounters with both deep gnomes and illithid in their quest for the true cause of the earthquakes. The creature causing the earthquakes is a draknor which has sent its huge tentacles into the earth seeking magma to fuel its growth. The Case of the Kidnapped Cartographer A dear friend of the party has gone missing; Boddyknock the gnome cartographer, supplier of maps and charting equipment. Can the party solve the mystery of his disappearance? Do they have the bravery to delve deep to recover their lost ally? What horrors will they uncover in the cavernous expanse beneath their feet? 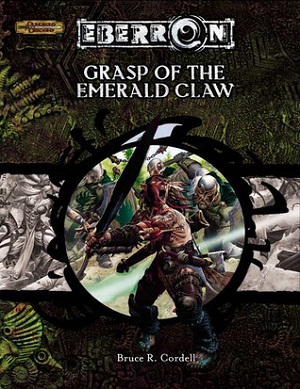 Deep in the jungles of Xen'drik, a relic of great power has lain hidden for thousands of years. Now, determined adventurers race against time and the nefarious agents of the Order of the Emerald Claw to locate the relic, overcome unimagined obstacles, and unlock its ancient secret. The Order's hunt for the parts of an ancient creation pattern nears its conclusion, but other groups also seek this powerful item. Once all of the pieces come within close proximity of each other, the ancient intelligence awakens. Suddenly all parties have a new and powerful enemy to contend with... THE NEXT MARCH WASN'T DUE FOR ANOTHER 189 YEARS. TRY TELLING THAT TO THE MODRONS! On a regular schedule, the Great Modron March spills out of Mechanus, and the lawful automatons files their way around the Great Ring. No one knows why they do it, but everyone stays out of their way - because when the modrons march, they'll walk right over a berk who doesn't know enough to move aside. But this March has started decades before it was supposed to begin, and that's even more of a mystery. Caught unprepared, the planes shudder under the modrons' collective footsteps - and even the modrons themselves seem a little out of sorts. The Great Modron March anthology features 11 adventures for characters ranging from 1st to 10th level, as well as new information about the modrons of Mechanus. Each adventure can be played separely or linked together to form an extended campaign. The modron procession touches every Outer Plane in turn - and it isn't always welcome. On their unswerving path, the clockwork creatures will destroy celestial towns, be attacked by evil knights intent on using modron parts in foul experiments, and lead characters onto the deadly plains of the Abyss and into the famous prime-material labyrinth of Undermountain. Without help, they'll be lost in the swirling chaos of Limbo or even fail to complete the March entirely. And along their route, every blood on the planes seeks the answer to the most important question: Why have the Modrons abandoned their normal, lawful schedule to march years before they're due?